For weeks I have taken my daily walks and past the big oak tree that provided me with the balloon epiphany I told you about last month (see: Eternal Balloons, Endless Hope). Yet for all of my strolls past the bare tree I haven't really taken a look at it. In fact, until this morning, I can't remember one single walk that I have scanned the leaf-less branches for a sight of my colorful bunch of balloons.
Until today. On today's walk I looked back to the tree and there they were. The balloons - my balloons.
A few weeks back, when I first spotted the balloons, they were freshly released, still in their helium-filled state. Had the inflated balloons freed themselves from the oak's arms they would have drifted beautifully up into the sky. But tangled on the bare branches of the tree, the balloons couldn't fly. It was in those trapped balloons that I saw a vision of how God has been holding my hopes and dreams in His outstretched arms. By letting go of the balloons I had inflated with my heart's desires and deepest longings I had expected them to float off into the oblivion of the sky but that wasn't their fate. God had caught them, trapped them, keeping them safe ever since.
But today as I looked up into the tree my eyes beheld a very different scene, followed by a drastically different epiphany.
The balloons were still there alright but they were a little worse for wear to say the least. In the weeks spent in the branches of the tree the bundle of balloons had been beaten by storms and ravaged by winds. For weeks the elements took their toll on the flimsy rubber, leaving them deflated, punctured and completely flat. The words and cartoon images that once covered the colorful air-filled decorations had been washed clean. In their current depressed state the released balloons wouldn't have soared beautifully into the sky. They would fall to the ground in a heap of trash.
But somehow in those balloons I could still see my dreams. Beaten down, battered and broken, those balloons still looked like the hopes I've released to God. Like those balloons, my deepest longings have been held in His arms during fierce storms and ravaging winds. He hasn't let them go. Through temperature changes and deep freezes God has kept my dreams alive. Through every relentless, ravaging trial God has sustained me and my hopes.
Today, years after releasing my dreams and hopes into God's care, my heart's longings have changed. Like the balloons held in the grips of the oak's branches, my hopes have been deflated of the puffed up air that won't last. My dreams have been purified. The deepest longings of my heart have been cleansed and washed.
And God isn't done yet.
I need not fear what He has planned because nothing - not a wind, rain, sleet or hail storm on earth - has the power to disrupt God's will. God has a plan for me inflated with the promise of His eternal hope for the future. Despite the passage of time and the passing of storms, God has not forgotten a single one of my heart's desires. The Almighty God, the keeper of my balloons, is protecting my hopes, purifying my dreams and transforming me in the process. 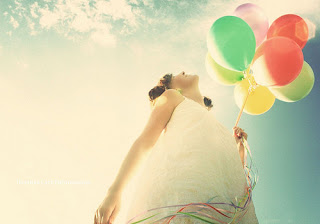 Posted by Stephanie at 4:00 PM