Today on my morning dog walk I looked up and saw a bundle of balloons stuck in a big tree. The shiny blue and white rubber twisted and tangled around branches, their strings dangling in the wind.
As I looked up at those balloons, evidence of a night of celebration, I saw something infinitely more profound than a party. I saw my hopes and dreams.
Over the past six years I have been clutching with white knuckles my own bundle of balloons inflated with hopes for a different future and dreams of a full life. I've hung onto heart-shaped balloons, dreaming of someone to love. I've tried so desperately to keep hold of balloons blown up with the hope of health.
But recently I've started letting go of my balloons. My hands have been loosening their grip. My heart hasn't wanted to hang onto tangled strings any longer. So one-by-one I've been releasing my balloons, sending my hopes and dreams into the sky.
All the while, as I've been letting go, I've assumed that my hope and dream filled balloons have been disappearing into the sky. That's what balloons normally do. They sail up and away on the winds of change and soar off into the distance. They become specs in the sky, they fade into the clouds and become distant memories.
I figured that's where my hopes and dreams would end up, too.
Lost to the skies.
But I was wrong.
As I've been releasing my balloons, finding freedom in unclenched hands and serenity in living unfettered by tangled up strings, God has been trapping them. He's been catching my hopes and dreams on the branches of His mighty, outstretched arms. I never looked up long enough to see that He has been storing up my liberated longings. Little did I realize that the desires of my heart haven't been disappearing. They've been being kept safe.
God has been taking my hopes and dreams and weaving them into my story. Today I looked up into the trees and finally understood that by releasing my will to God He was able to grab hold of it. By giving Him the deepest desires of my heart I was actually making sure they would be safe and protected. When I gave up trying to hold onto strings that were leaving me twisted and tangled, destined to one day deflate or pop, God took hold of them and suspended them in eternity. By giving God control of my hopes I wasn't letting them float off into oblivion, never to be seen again. I was actually putting them in the ultimate place of protection, the providence of God's will and the power of His hands.
In the trees God revealed to me that He alone has the ability to hold onto the balloons of my hopes and dreams without getting tangled or letting a single desperate longing blow off into the wind. When I let Him take over the strings He is faithful to keep hold of my balloons and knit them tightly into His plan for my life.
God has not, for a single moment, let my hopes and dreams out of His sight. They aren't just a spec on His radar, floating off into space. They are close to His heart. They are in His hands. And one day they will descend back down into my life when the time, His time, is right. 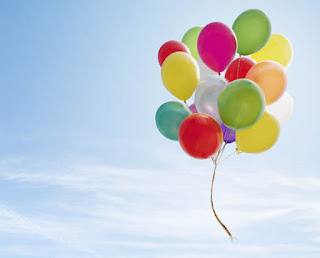 Posted by Stephanie at 5:06 AM