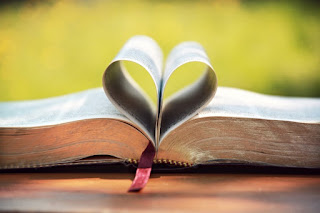 Joshua sat on the hard, wooden kitchen floor with his blanket covering his lap and a stream of gooey tears covering his face. The young child was inconsolable. His cheeks were a fiery red. He gasped for air between sobs. His shoulders quivered with sharp jerks up and down as he let out audible whimpers and cries.
Joshua was utterly traumatized. His mom was gone. One minute she was there and then poof! She was out the door and out of sight. It happened so suddenly. They had always been together, Mother and son, and then Mother took son to a foreign land and left him behind. Even when he tried to cling to her she protested his coming and left him all alone.
At least that's what the two year old crying on the kitchen thought when his Mom departed Grandma's house to run some errands for the morning. From the moment his eyes saw the troubling sight of Grandma's front door he was on edge. From previous experience he knew what was coming next. Trips to Grandma's, or church nursery, always ended with Mom walking away while Joshua stayed behind.
For some children this might have produced not a single tear but that was not the case for Joshua. He protested loudly the departure of his Mom and never fully recovered from the agony of her absence until her return arrival. In her presence his anxieties were calmed and peace was restored but until that blessed moment he refused to be held or comforted. Even a cookie couldn't calm him down. Joshua pushed away sugar and frosting as he flung himself down on the most uncomfortable floor in the house and proceeded to cry.
At a loss for how to ease Joshua's distress I knelt down on the floor before him and started to sing. I'm not a mother yet but my experience with many nieces and nephews has taught me that when in doubt, music is worth a try. And so I began with my personal favorite, Amazing Grace, and hoped Joshua would enjoy my musical selection. Two verses and three choruses later, Joshua was still crying.
I tried a few other songs. Each one met similar results. Joshua's shoulders were still rising up sharply in quiet quivers and his cheeks were still quite red. Convinced that music wasn't helping I was about to give up when Grandma made a request for Jesus Loves Me. Never one to deny a song request, I started in with the familiar children's song. "Jesus loves me this I know...for the Bible tells me so...Little ones to him belong...They are weak but He is strong..."
For a moment's pause after the first verse I thought Joshua had settled down but a few beats later I realized he wasn't any calmer. He let out one final throaty sob before he got up with his blanket to escape into another room. Apparently, Joshua did not want to hear that Jesus loved him.
I almost laughed at the irony of it. When confronted with the comfort of Jesus' love, Joshua wanted to flee. Surely this little tune with such a simple melody and the peaceful message should have stilled his stress and anxieties. It should have quieted his soul and put his heart at rest!
But the irony of Joshua's distress is the same irony of my own heart's refusal to rest in Jesus' love. Surely the good news of being precious to the Lord should still my own anxieties and comfort my own soul but how often do I flee from the God's love? In distress and trouble when I am crying out to God with laments and sobs that come from the depths of my spirit do I find my peace and serenity in knowing that Jesus loves me? Is the Bible's truth enough to steady my heart? Is belonging to Him and being upheld by His strength my rock and foundation, steadying me in times and trouble and delivering me from all fear?
Joshua crawled/staggered/stumbled away from my singing and eventually cried himself into a sound sleep. At least he had a good nap at Grandma's. Before long, his Mom pulled back into the driveway and peace descended on Joshua like a flood. All was right with the world again.

In Joshua's refusal to be consoled in his time of need I saw myself push away and against the comfort of God. Convinced that my hardships are too dire, my sorrow too upsetting, I have separated myself from His love and chosen instead to lay in the misery of my depressed heart's cold, bleak floor.
But no matter how hard I cry or how red my cheeks, God doesn't give up singing His truth to me. Even when I turn from the goodness of His presence He draws near to me with lullabies of His love. God's soothes my soul and upholds me in His grace. Jesus washes away my sobs as He sings, "I love you...this you know...for the Bible tells you so...little one, to Me you belong...alone you are weak, but with Me you are strong..."
Yes...Jesus loves me...
Posted by Stephanie at 4:27 AM