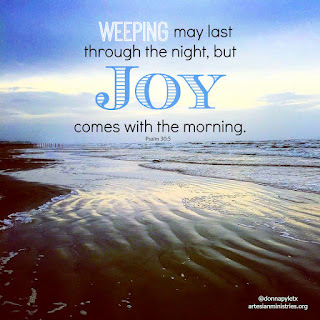 Hold your breath, here comes another wave....
That was all I could think, the wave was all I could see, as I threw back the latest in Lyme killing treatment. As I swallowed the liquid antibiotics my mouth pursed and my throat recoiled. Within seconds the antibiotics were tossing and turning in my fragile stomach.
As the queasy aftermath overtook my body I could practically see the white caps of a massive wave forming out in the distance of my healing sea. It wouldn't be long before that wall of exhaustion, pain, and surprise symptoms would make its way to my shore. The air shifted and dark clouds formed overhead, announcing the imminent arrival of the coming storm.
As I braced for impact the enemy began snickering and whispering in my ear. He taunted me with threats of the onslaught to come. "This is going to be a big one...Good luck holding tight.." He employed the violent winds to join in his lies, tempting me with defeat in every gust. "Just give up now... Abandon joy and lose your faith.." From the midst of the angry sea the devil's deceptive tongue questioned me, "Where is God now?... Is this what you call healing?" With each word of trickery my enemy plotted to take me down in the coming healing wave.
But as the wave made its way closer to my shore a force more powerful than evil whipped through the wind. On the sea's the unmistakable voice of truth roared louder than all of the enemy's lies. The glorious light of truth penetrated the gray skies above.

From the throne of God, Truth thunderously proclaimed:
This wave is not the enemy's victory. This wave is his final defeat.
And so I held my breath and held on tight, declaring David's words as the wave came crashing down on me...

I will exalt you, Lord,
for you lifted me out of the depths    and did not let my enemies gloat over me.
(Psalm 30:1)

The wave had its way with me but God has His hand on me. He put in my heart a song of praise even while my body was pounded against the shore line. He refused to leave me. He wouldn't forsake me. Satan did his best to upend my faith but God upheld it with the truth of His word and the power of His promises.
God delivered the enemy his defeat and claimed the Lord's victory.

Dear friend, if you find yourself in the path of a wave of destruction, bracing for the next healing wave, the next trial or the next crisis, do not listen to the words of the enemy. He will tell you lies and project them in the winds. He will try to overtake you with waves of worry and defeat you with questions of doubt.
Beloved, do not become defeated under clouds of darkness. Do not listen to the devil's lies. Hold fast to the promises of God for He has established your ultimate victory and He will meet you on the shore to claim it and proclaim it.
Call on the name of Jesus and unite yourself with His Holy Spirit. Take up the Word of Truth and read your enemy the announcement of his defeat. Proclaim it in a Psalm. Sing it in a song.
This wave is intended to conquer your enemy, not your faith. This wave is going to capsize his evil schemes, not your peace.
Hold fast my friend because by the power of God and for His eternal glory, this wave is about to deliver a mighty victory.

Posted by Stephanie at 5:14 PM