A journey of joy

The journey has felt long. Indeed it has been long. Seven years long. A short time in light of eternity but a significant magnitude of time in the eyes of a twenty-seven year old.
Seven years ago the journey began when God opened the doors of a train with no formally announced destination. He warned me to "mind the gap" and I heeded the call. The moment I boarded the train it departed from its comfortable station to embark on a voyage into the unknown. I looked behind me as the train pulled away and waved goodbye to the only life I had ever known. As my life went speeding off on a new track I watched all things familiar and routine fade away. In what felt like an instant the platform of my former life disappeared.
On this new, mystery journey, I peered out the window to behold a stunning view. My eyes took in sights unlike anything I had ever seen before. Life outside the train's windows were nothing like the view on the platform of the train's station. The vistas were breathtaking. The valleys were humbling.
The train went up and down mountains, making daring twists and turns. At times the train slowed down and then sped up but it never made a single stop. I waited tucked away in the train's cabin for the conductor to make an announcement about the future but no radio call ever came. The train journeyed on its mysterious route.
As the train lumbered along and the years passed by I nearly became weary of the journey. I started questioning why the ride was taking so long and where the train would ever end up. Frustrated and confused, I shut the curtains of my cabin's window. I was lonely, sad and in need of a good long cry. So that is just what I did. I laid my head down and soaked my well worn pillow in tears. I gasped for breath and sent sniffles reverberating throughout my empty cabin.
But then someone interrupted my breakdown. A fellow traveler knocked on my cabin door. God made His presence on my journey known. Hesitant at first I welcomed Him in. I didn't ask Him any questions. I didn't even ask Him about the route of the train or its speed and lack of stops. His presence left me speechless...tearless...stunningly sniffleless.
The train traveled on. It didn't pause for my frustrations or make a stop for my sorrow. It just kept going. Up hills, around corners, over waters and bridges. It kept going but I stopped crying. God's presence in the cabin dried up my tears. My heart ceased its yearning for a platform in the world. My anxious spirit that was begging the train to slow down and make a stop was replaced with a spirit at comfortable rest. My eyes that were looking out the window trying to catch a glimpse of where the track was headed next stopped looking ahead and barely even looked out. My eyes, my heart and my spirit became fixated on what was inside the cabin. God, the lover of my soul and giver of my life. The Lord God, my source of joy for the journey.
The train hasn't stopped yet. The journey hasn't come to a close. I have yet to reach a platform and be let off. By now, seven years into this journey, I can hardly remember what the platform of my old life looks like. I have a new life now. A life on a journey with God - a beautiful, exciting, adventurous, joyful journey. 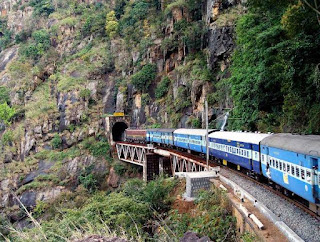 Posted by Stephanie at 6:51 PM