There is a reason human beings aren't squirrels. We're not very good at being squirrely.
Our innate ability to be squirrel-like in deft scurrying and scuttling is just the start of our wildly inferior inborn squirrel skill set. We aren't built for quick zigs or sharp zags. We don't do well running at twelve miles an hour straight up trees. Our fumbling, bumbling bodies weren't built to hang and swing between leaves and branches. Our feet weren't designed with built-in pads to cushion six meter long leaps!
We humans typically don't plan our winter meals six months in advance. Nor do we live exclusively off of nuts. Our brains were formed to remember more than the location of buried acorn treasure. We were given arms instead of tails to be used as signaling devices and words instead of chirps for effective communication.
As human beings with unique thoughts, emotions and life spans that last longer than five years, we have been given a set of features and specific design that is entirely different than your typical squirrel. Flying or otherwise. No matter how hard we try, we humans will never perfect squirreliness.
So why do we even try?
Why do we try to be squirrely with our hyperactivity that is always striving for more? Why do we try to perfect the squirrel's frenetic movements in an endless quest for significance, meaning and fulfillment? Where did we get the idea that we could run straight up trees or that it's even a good idea to try such a maneuver?
Where in the world did this notion come from that we humans, built with two arms, two legs and brains larger than a walnut, should function with the same manic, wild, utterly frenzied pattern of behavior as a woodland squirrel? We simply aren't built for it! We aren't designed to live like manic mammals constantly on the hunt for the next best berry, shrub, nut or rare, prized piece of stray bird seed.
We're made for so much more.
As humans we were made with unique gifts and abilities. In our mouths we are imparted with tongues and in our chest a set of lungs perfectly suited to talk and speak. Our eyes were perfectly placed to look straight forward, always to the future. Our hands were built to hold and our feet were designed to walk on solid ground.
Our human bodies aren't endowed with the keenest sense of smell but what we have been given is a great capacity of heart. Inside each of us resides a soul with the ability to love, care, encourage and sympathize. This beating vessel so critical for our survival is the same vessel that houses the life-sustaining Spirit. It has no need for hibernation and it doesn't store up in barns or deep in the ground.
This Spirit within us is God's. It is the breath of the Almighty inhaling eternal air into our flesh and bone. It is the hand of God keeping our hearts steady and secure.
The Spirit that God places in us isn't hurried. It isn't frenzied or manic. It never zigs and zags from here to there. It doesn't run up ahead or burrow in the ground for months on end. It is always present and consistently calm. It is unshakably steady and sure.
God's Spirit that lives in you and I, humans without a bit of squirrel mixed in, sets us apart from the rest of the world. It is this living, breathing Soul of the Lord dwelling within us that makes us unlike any other mammal scurrying across the surface of this divinely created earth. It is God's Spirit within us that sets us apart, sets aside and sets our hearts in Heavenly places.
We human beings are not built like squirrels and we're not built to live like them, either. We are built for Heaven and to live like we're already there. 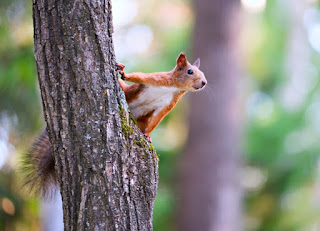 Posted by Stephanie at 3:03 PM