I grew up nestled, geographically, between three major NFL teams; the  Buffalo Bills, the Cleveland Browns and The Pittsburgh Steelers. Come Sundays during football seasons the supporters of each team could be easily identified by the color of their clothing. Buffalo supporters wore red or blue. Pittsburgh fans were decked out in black and gold. Cleveland diehards would break out the brown and orange.
Given my lifelong position of sports neutrality I purposely avoided all such colors on game days. My aim has always been to be the Switzerland of football fandom. This is due in part to my family's divided team loyalty. Dad, born and raised outside of Pittsburgh, has been a life long Steelers supporter. My brothers are Cleveland team enthusiasts through and through... along with all of their kids who run the risk of being exiled to a Harry Potter-style closet for a bedroom should they pledge allegiance to any team outside of Cuyahoga county, Ohio.
To keep the peace I've kept away from gold and orange on Sundays. Not that it is any major loss to my wardrobe. I'm not known for sporting sparkly gold and orange was never my color. That all changed this time two years ago. Until the month of June in 2014 I had always associated orange with football, The Browns and, sorry Cleveland, losing. Orange was the color of loyal fans who remained true to their team despite suffering continuous losses and sporadic wins.  But with football season out of sight and out of mind, orange became the color of my life for an entirely different reason.
Orange is the color synonymous with Multiple Sclerosis awareness. Two years ago, when I received my own MS diagnosis I looked at the orange ribbon displayed in support of the disease and saw what I had always seen on the face's of those diehard Cleveland Brown's fans: defeat. All of my research and reading pointed to loss. The best outcome I could hope for was management. I might be able to stay in the game but no one would be placing any bets on my making it to the playoffs, let alone winning the MS equivalent of the Lombardi Trophy. In that defining diagnosis moment, orange took on a meaning more depressing than a losing football season. I looked at orange and saw incurable, inescapable defeat.
This coming month will mark the two year anniversary of my diagnosis and my clouded vision of the color orange. It has been a roller coaster of a couple of years with countless ups and downs. My health still fluctuates, the Browns still haven't made it to the playoffs and orange is still the color of MS awareness. But my view and understanding of orange has changed. It no longer symbolizes defeat and loss. Orange is the color of glory.
In these past two years I have learned that God has given me MS as a match to start a flame of glory for Him. My suffering and my struggle is my own personal light that burns a brilliant orange as a witness to the faithfulness of God. Orange signifies the fire in my soul that has been set ablaze by the indwelling of the Holy Spirit. Orange is the power of God's all consuming fire that envelops me and sustains me. Orange stands for the purpose and plan He has for me in spite of MS.
This football season I won't shy away from wearing orange because it will no longer be a symbol of sports or a city. God has draped my heart and my life in His glory, a bright and shining shade of orange that stands for eternal and everlasting triumph over every foe. Orange is and will forever be the color of God's victorious light in me. 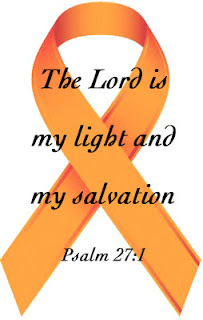 Posted by Stephanie at 5:21 PM