Paul's words to the church in Corinth might have been on Pippy's mind this morning as she lay peacefully next to Patches on their cushioned, community "pet" bed.
Paul wrote in I Corinthians 1:10, "I appeal to you, brothers and sisters, in the name of our Lord Jesus Christ, that all of you agree with one another in what you say and that there be no divisions among you, but that you be perfectly united in mind and thought."
I assume that Pippy and Patches were heeding his direction given their relaxed, comfortable positions. Their thoughts were clearly united: sleep.

I don't know how they came to this mutual agreement. Pippy was alone on the bed to begin with but then Patches entered the room. Normally Pippy flies off her bed to greet Patches but this morning was different. Somehow she must have known that Patches intended to snuggle up with her if only Pippy would remain still enough to enjoy the companionship.
Pippy didn't leave her bed. Instead she lay perfectly still as Patches stepped onto her side of the large cushion, walked in a small circle and then proceeded to curl up into the shape of a cinnamon roll. Pippy never disturbed her process of finding the perfect resting position. Pippy also didn't stretch out on the bed to ensure that Patches wouldn't have room to curl up on the comfy cushion. Pippy stayed on her side and let Patches enjoy the rest.
I must hand it to Pippy, she is forgiving and welcoming despite the fact that Patches has not always been friendly, to say the least. Pippy doesn't hold that against her cat companion. She lets Patches be her cynical cat self while Pippy remains her congenial doggie self.

I, on the other hand, am not always so agreeable.
Unlike Pippy, I don't always heed the words of Paul and live in harmony with my fellow life travelers. I allow division to grow and fester because of past hurts and human shortcomings. Instead of choosing forgiveness, I choose to let resentment and hostility fester, creating a great divide.
Pippy isn't so flawed in her love and acceptance. Patches has hissed at her. Patches has shown her plenty of disgust and antagonism. And still Pippy doesn't push her off the bed!
If I were Pippy I'd be telling that cat to go find her own over-sized cushion. You want to share? Then be nice, you big lazy cat! (I would not be as sweet a dog as Pippy, can you tell?)
But Pippy doesn't demand that the cat change her attitude or offer up an apology in order to share in the comfort of the pet bed. Pippy just accepts her for who she is and then lives her life peacefully and harmoniously despite how the cat might be acting that particular day. Is the cat hissing? Pippy still loves her. Is the cat hiding from Pippy's affection? Doesn't matter, Pippy will still welcome her back onto the big cushion when she reappears.
Pippy doesn't treat Patches a certain way because Patches deserves it. She doesn't choose peace and happiness and harmony because Patches is so darn easy to get along with! No, Pippy is going to be a content, joyful, peaceful dog no matter what little funk Patches is in that day. Patches can be rude and mean yet Pippy won't let it divide her unity with her fellow pet companion.
I could learn a thing or two (or three or four) from Pippy. It doesn't matter how other people treat me. I decide whether or not I am going to forgive them, move on and live in united peace with my offender. Holding hostility and resentment in my heart doesn't do anyone any good. It doesn't change that person's behavior and it doesn't bring me joy or contentment. The resentment just simmers, souring my attitude and ruining my witness for Christ.
Paul made the point clear: live in unity. Pippy appears to have mastered that command. Now it is my turn by choosing to forgive others - choosing to live in unity and harmony. 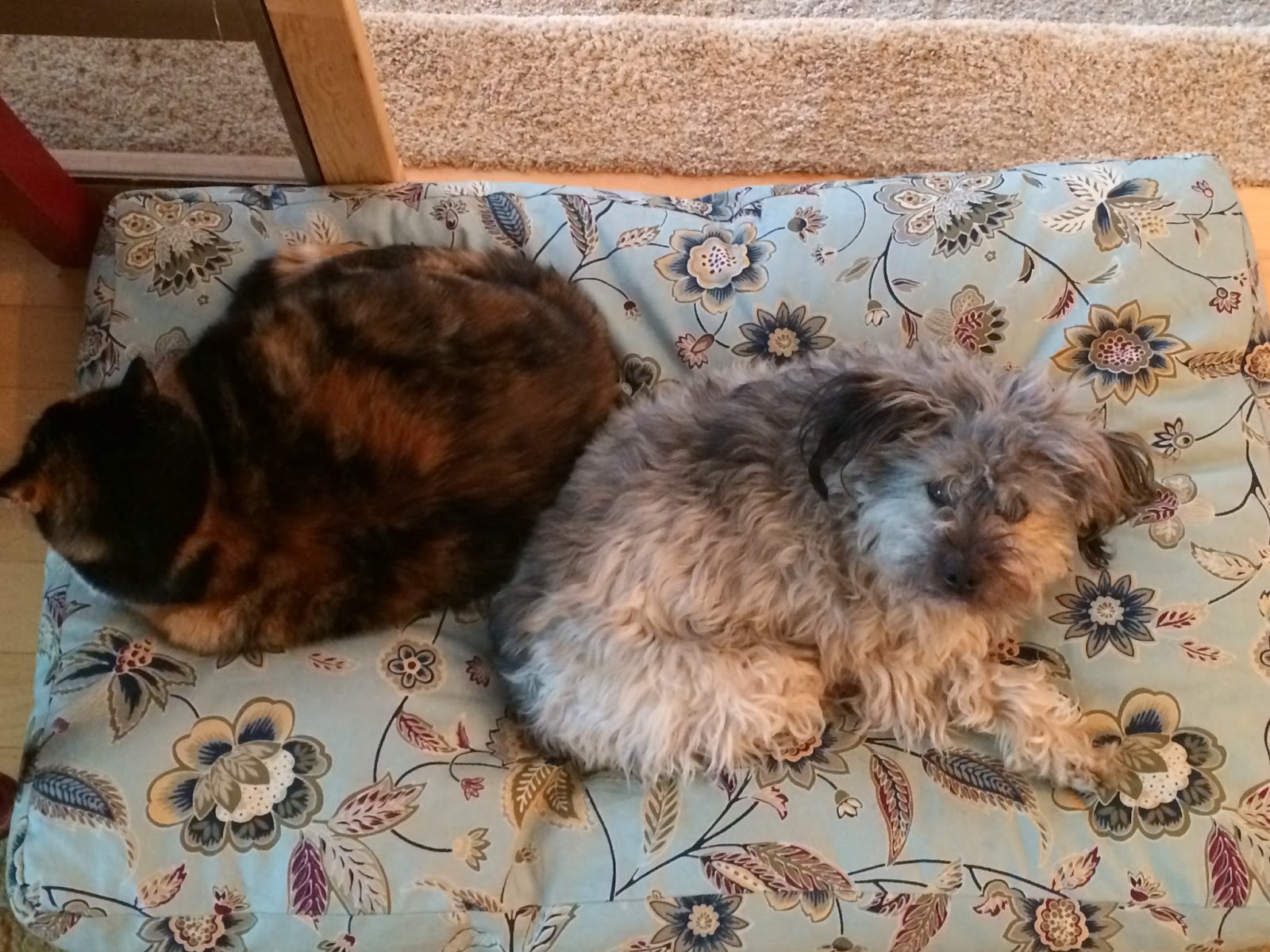 Posted by Stephanie at 6:23 AM