On the scales again... 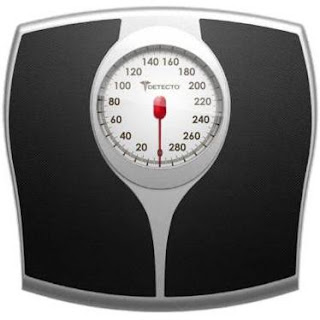 Scales are scary. They reveal troubling numerical truth which is why for the past year I have refused to step on one. Even if I can't keep my shockingly low weight out of mind at least by staying away from the scale I can keep the numbers out of sight.
April 2017, during my first office visit with a new doctor, was the last time I faced the weight-gathering, truth-teller and the number that appeared before my eyes was shocking.
Sixty eight pounds.
I remember seeing the red dial swing up and hover just below the seventy pound mark. I held my breath, trying to keep in every last ounce of weight but my attempts were futile. I couldn't make the number budge. At twenty six years old I couldn't make the scale reach a measly, pathetic seventy pounds. The scale read me a troubling truth: I was back to my twelve year old weight.
At that moment I began a scale boycott that has remained in effect for ten months. But that all changes today because today is the day of healing that the Lord has made and I am going to step on the scale believing in that!
When Jesus Christ rose from the grave and conquered the empty tomb He guaranteed that no scale on earth will ever have the final say. God alone controls the numbers and the pounds. Sickness and illness are powerless to trump his authority or thwart His plans.
If it be God's will that the numbers rise and pounds be added, even a broken scale won't be able to deny the healing. If it be God's will to keep the scale's number stable it will by the Almighty Hand of God that supports and sustains every little pound.
Today I am going to step on the scale without fear or worry. There is nothing to fret because God is the one working the dial. With the assurance of Heaven I can place my scale on a solid surface trusting God regardless of the reading. United with the Savior and His cross, I can face the scale with the grave-defeating confidence of His victorious resurrection.
God alone holds the scales of my life so I can step atop any earthly scale knowing that my healing day has already come in the risen Jesus Christ.
Posted by Stephanie at 4:36 PM