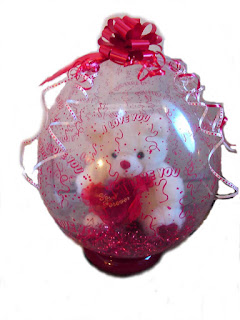 It is one of my first childhood memories...
I was about three or four, and my most precious, treasured, teddy bear was lost. I'm sure at the time this teddy bear had a name although that detail escapes me now. What I do remember vividly is the garden green ribbon around the soft, fluffy white neck of my bear. His eyes were a little droopy and his nose was made of thread. I loved that bear and carried him with me everywhere.
Then, one fateful morning just a week before Valentine's day, my beloved bear went missing. I was devastated. At that young age, the loss of my cherished bear was the greatest I had ever known. I searched for him in the house but he was no where to be found. I retraced my steps back to the grocery store where I last remembered seeing him but a call to customer service resulted in more bad news. There had been no bear sighting. Teddy was gone.
With a distraught daughter at home, I remember my Dad did something unusual that chilly February night. He went shopping.
After hearing that teddy was last spotted at the grocery store Dad returned to conduct his own search. When he came up empty handed he refused to be defeated. Determined to bring home a bear he made a stop in the store's gift isle. With just a week to go before Valentine's Day the shelves were well stocked with red and pink packages. It was the perfect place to find a new perfect bear for a little girl.
When he arrived home that evening, Dad walked through the door wearing a big smile, holding a big, eighteen inch tall balloon. The balloon was clear and decorated with a festive cupid scene complete with hearts and swirls. But inside the balloon was the true treasure. Sitting atop a bed of glittery red and white confetti was a soft, white fluffy bear with gentle eyes and a heart on each paw. Inside the balloon was my new teddy.
In my four short years of life that was my first encounter with a stuffed animal inside of a balloon. To this day, I have yet to encounter a second. It was and always has been an incredible gift.
With my new bear to hug and hold onto the thoughts of my lost teddy faded away and into the distance. Captivated by the wonder of the gift I'd been given, what I lost became a memory.

My dear Valentine, this is just a glimmer of the beautiful love displayed by our Heavenly Father.
In our loss He comes to our side and satisfies us with His Son. Before the throne of God's grace He bestows the greatest treasure of His Son's Holy Spirit.
When a child cries out and calls on the name of Jesus Christ, the Heavenly Father does not delay. Swifter than a balloon floating down from heaven, He will come and lend His mighty aid. He will enter from on high and lift the burden of His precious child's frantic search. He ends the hunt at the foot of the Cross. In the gift of Christ He replaces sadness with His everlasting, eternal gladness.
Surrounded by the overwhelming glory of the Savior, captivated by His goodness and grace, every thought of loss fades away and even the most precious of teddies becomes a distant memory. Just simply being in the presence of Jesus Christ, that is truly the only "teddy" any of us will ever need.