The show must go on

The isle of blue cushioned auditorium seats ran in a slight descent from the back of the theater right down to the orchestra pit and center stage. I grew up dreaming of being on that stage, standing in the center of the spot light, performing to a captivated audience. In my imagination I could see myself acting out scenes in my favorite musical productions so when the auditions for Annie came around I put on my best performance for the directors, hoping to land a spot on the stage.
I left the audition with optimism, convinced this was the show I would finally land a speaking role. On the day the cast was announced I eagerly approached the posting displayed on the theater's front door and checked for my name. Then I checked twice. My name wasn't on the list.
The list absent my name crushed my center stage Annie dreams. I was disappointed and discouraged but my love of the theater wasn't defeated. Determined to find a way to be part of the production I took a position as part of the back stage crew assisting with the moving of set pieces and setting of props. The role of stage crew didn't come with a costume or speaking part but at least I would be "on" the stage. Even if it was hidden behind the curtains.

Just a few nights before the first public performance I stood in the back of the theater behind the long isle of cushioned auditorium seats. I was imagining the thrill of opening night when the director's voice boomed through the speakers and impatiently announced it was past time for places. I had lost all track of time and now I was late to get back stage. In a hurry, I leapt into action and quickly moved down the isle towards the stage ignoring the theater's "no running" policy. In a rush, I ran.
And that's when tragedy struck.
When the gradual descent of the theater floor met with my two left feet I was sent flying forward. I cascaded downward until my head first fall was broken by row J's arm rest. I hit the ground in a state of shock.
Every voice in the theater went silent and every onlooker in the room joined in a collective gasp. But it is what happened next that was truly shocking.
I hopped right back up again.
As if I were a cartoon character and the arm rest were a trampoline, I sprang back up and into action. Instead of being leveled by the impact I was catapulted forward. The force that by all accounts should have knocked me out miraculously lifted me up.
Back on my feet again I set of running. Without a moment's hesitation I bounded up the stage steps and disappeared behind the curtain to take my place with the crew. The show had to go on.
Within hours of my big fall I had a big black and blue bruise covering my eye. I looked as if I had been in a bar fight that row J had won. Not even stage make-up could hide the damage.

It took weeks for my beaten and battered eye to finally heal but the lessons I learned from that big fall have lasted much longer. I assure you I most certainly learned why the director had a "no running" policy in the theater but I learned something else, too. I learned that I'm far more resilient than I ever imagined.
Despite having a black, puffy eye that obstructed my vision and caused a pounding headache I still performed my stage crew duties setting props and moving set pieces. The catastrophic blow to my eye couldn't keep me from fulfilling my role behind the Grand Curtain.
From that great theater fall I learned that no matter how black and blue the eye or how hard the hit, the show must go on and it can go on. Just because I have been knocked down does not mean I have been knocked out.

Since the day of my great fall in the theater I have taken countless falls in life. Physically, I've taken illness falls that have sent me cascading face forward onto the ground. Lyme and its infections have beaten me black and blue, inside and out. But by God's healing hand, the show has always gone on.
In my spirit I've fallen, too. I've broken God's "no running" policy and run when He's said "walk." I've disobeyed. I've tripped and fallen. But by the power of God's forgiveness, the show always goes on.
Every time I have taken a great big fall and ended up flat on my face God has lifted my body and soul back up with shocking resiliency. He has never - not once - left me sprawled out on the floor without providing a way to bounce back up.
At the bottom of my life's greatest falls I have experienced the softest trampolines cushioned with God's grace and redemption. When I've hit the ground, or row J, God has always met me there and raised me back to life again. He is always faithful to transform my shades of black and blue into hues of His resiliency and grace.
By the power of God's Almighty hand, in accordance with His unfailing will, His everlasting show goes on. It always does. It always can. And it always will. 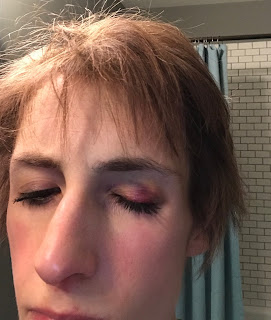 Posted by Stephanie at 6:12 PM