Down on antlers but not out of Christmas spirit 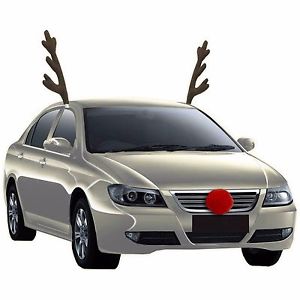 This Christmas season I took my car festive. It was a last minute spark of reindeer spirit that inspired me to purchase a "Car Costume" for my vehicle. Online I found a holiday car ensemble that included antlers wrapped in ribbons and bells and, of course, the classic Rudolph red nose. With only two weeks till Christmas I wasted no time making my one-click purchase and, two days later, Amazon Prime delivered.
When my package arrived I immediately unwrapped it and held up the contents of the bag: two brown antlers and one big round, red ball. But there were no instructions. How would this red nose stay on the grill of my car, I wondered?  How would the antlers stay affixed to my window when driving against the wind? The manufacturers instructions, or lack there of, didn't answer any of my questions. I suppose they figured dressing up your car should be self explanatory. Given where this story is going, I can assure you it is not.
Despite the lack of costume clarity, I was determined that my car would be festive this Christmas. With further inspection I figured out how to affix the antlers. The trick? Crack the driver's and passenger's windows.
After my car was officially a reindeer I picked up the perplexing red nose with my sites set on Rudolph. Unfortunately, further inspection did not reveal a red nosed trick. After minutes of frustration and failure, I gave up on my vehicle becoming Rudolph and settled on Dancer instead. After all, not all of Santa's reindeer have red noses.
Since my car put on its costume my driving experience has been enhanced. Since my vehicle became Dancer my travel has been as merry as a Christmas Eve ride on a one horse open sleigh.
Or should I say, was as merry as a Christmas Eve ride on a one horse open sleigh. Driving Dancer was a joy and a delight until Dancer lost her antlers.
It happened one at a time. The first antler annexation occurred during heavy rains. It all happened so quickly I didn't even get to say goodbye. The window was barely cracked, just enough to let in a little fresh air when the car, I mean sleigh, got stuffy. But that's all it took for the wind to carry Dancer's poor left antler away.
Down one antler and still without a nose, my car's ensemble went from sparse to silly but I refused to give up my festive reindeer spirit. Who's to say Dancer didn't have only one antler? If Rudolph could have a red nose, why couldn't Dancer have one antler? In my version of Santa's sleigh Dancer was down an antler but she wasn't out.
So for days I drove my one-antlered Dancer with just as much Christmas spirit as two-antlered Dancer had delivered.
But then tragedy struck. Or, should I say, snow struck. It all happened so quickly. There was rain and then suddenly it turned to snow. My windows began to fog up immediately. Desperate to see I cracked my right window and that's when it happened. I heard the "swoosh" of bells on antler ears as the wind took the last piece of my car's festivities up, up, and away.
Now, with two days till Christmas, my vehicle has lost of its festive spirit. My days of driving Dancer are over. With both antlers gone and a red nose still perplexing me from its packaging, my vehicle is done pretending to be a one horse open sleigh. It's just a little black SUV with really powerful heated seats.

Sometimes Christmas festivities don't end up like we think they should. Sometimes the package is delivered and its contents don't fit quite right. Sometimes it feels like the instructions are missing, assembly is confusing and everything is just plain frustrating.
Sometimes the holidays don't feel as jolly as a one horse upon sleigh. They may not look the least bit merry or bright.
But if you're December is down a few antlers and missing one Santa approved red nose, remember that your Christmas joy is not out because the real reason for the season is still dashing through the snow.
True Christmas spirit is not contingent on a car costume or any package that arrives by Amazon Prime. True Christmas spirit is found in the birth of God's Son, Jesus Christ. The baby born in Bethlehem is the cause of all merriness and the source of all light. The little Lord who was laid in a manger and slept in the hay is the cause of the celebration in December and all year long.
Whether you have two antlers and a red nose or your Christmas costume is a bit lacking this year, you can wear the most festive ensemble of all this holiday season. You can wear the joy of the Lord who has come to earth to bring good will to all and peace to the world.
Because God sent His Son to be born for the salvation of the world in the bleak mid winter of a Christmas long, long ago, you and I can be filled with a festive heart now and forevermore.