Dreams represented as deflated balloons trapped in the limbs of trees is an odd life metaphor but it is the one God gave me so of course, it's the one that's stuck.

According to the archives of Pippy Love, my first balloon encounter occurred on February 7, 2017. On that special day a tangled mess of deflated balloons trapped in the limbs of a tree delivered a special message and a big thumbs up meant just for me: It's time to take up dreaming again.
And dreaming is precisely what I've been up to ever since. I reclaimed my dreams of old and even started forming new ones. Without skipping a beat, my past champion dreamer skill set returned as naturally as riding a bicycle
The very first dream to return was one that I had completely let go: my dream of full health. When I gave up all hope on that particular dream I didn't even turn around to watch it fly away. But then I caught a glimpse of the balloons in the tree and viola! The dream of full health returned.
Next came the dream of a full, vibrant life with a bright future. This dream had never died entirely but it was so close to breathing its last that it troubled me. I had to search for my dream's pulse. It was nearing its last breath but the balloons brought it back to life with a miraculous recovery. The moment my eyes caught the sight of the shiny balloons new life was breathed into my precious dream. In an  instant the dream came back to life and, I am happy to report, has been breathing strong and steady ever since.
Over the next few days and weeks that followed my first balloon encounter dreams came flooding back like a damn broke open. Dreams for love. Dreams of a career. Dreams of a ministry or two or three. I even began dreaming glorious thoughts of God healing my body with His mighty touch.
My dreams returned at all times of day and night. Before the balloons I had slept through the night rarely recalling a single dream but with the balloons came a blessedly disrupted REM sleep cycle. One night I envisioned myself in a grand ballgown, standing on a ship set out to sea. In another dream I saw a field of flowers so magnificent that only heaven's glory could rival the beauty of the scene.
As you can imagine, I've started looking bit more closely at trees, scanning the limbs for a stray dreams - I mean balloons - to claim as my own. And today I saw another one, although not like any other I'd ever seen. Today I saw a deflated balloon in the middle of a forest, laying among the sticks, dirt and moss of a wooded trail. I looked at that balloon and I knew it in an instant: that balloon is mine. The balloon had once been trapped in a tree but its time had come to break free from the limbs, and fall back down to earth. In the balloon I saw the fulfillment of a dream. I saw one of my balloons fall from the sky and gently fall back into my life.
But which dream was it?
I starred long and hard at the balloon trying to discern the particular dream that had once filled the air inside, the air that was now filling my lungs and my life. The balloon gave me no hints or clues. Even now, after pondering the balloon, its blue color and its wooded location, I have not a single indication of the dream it contained. The big reveal is still yet to come.

So, friends, mark this day down in your calendar: June 9, 2017, a special day in my history. It is the day the first of my balloon filled dreams reached its fulfillment. The first of many beautiful dreams to come.
Some day, maybe even some day soon, I know that I will be back at this keyboard sharing with you the ending of that particular balloon's story.  I promise to record the sweet, dreamy details of how the dream comes true.
And until then, stay tuned, because I know God isn't done showing up in dream filled balloons. 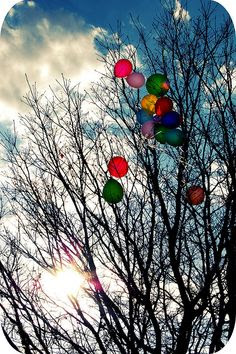 Posted by Stephanie at 5:42 PM