Fifteen years ago two American jet liners were hijacked by evil and used to kill thousands. That day is seared in the mind of every one old enough to remember the horror. Victims jumping from the burning towers. Survivors fleeing the towers were covered in ash, others covered in burns, some actively covered in flames.
After the towers fell New York City was unrecognizable. The landscape of the city and the lives of every resident forever changed. Fear flew into New York City and fell on it with a weight more gigantic than a million tons of steal and rubble. Routine, cross-town, travel came to a halt. People were paralyzed by confusion and uncertainty. Families were ripped apart. Businesses laid to waste. A collective grief covered the city.
The city that never sleeps wasn't asleep. How could they sleep? But how could they laugh at a Broadway show or stroll carefree and easy down Fifth Avenue? How would the subways and transit ever return to normal operations? When businesses reopened would there be any customers? Could air travel be trusted? Could the city be salvaged? Could spirits rise above the rubble and the unspeakable loss of loved ones, friends and security?
Someone had to stand in front of those questioning faces and thousands, millions, of broken hearts and promise that there would be a way back. This wasn't the end. It couldn't be the end. There were still people alive, people being saved in the rubble and an entire city and generation to protect. The terror wouldn't win. The righteous couldn't let it.
The city's mayor, who would soon become America's mayor, Rudy Giuliani took the megaphone and used it to project a message of resilience in the face of ruin. When no one knew if recovery was possible, Giuliani decided to declare it. Terror had ravaged the city and shaken the entire country yet the memo from New York's leader was, "you are going to be stronger than this." The strength of freedom and goodness is going to defeat evil.

The same message needs to be shouted from megaphones and microphones in big cities and small. In every nation, among every family and to the deepest recesses of the human heart, victory must be claimed because evil is attacking. Satan is busy spreading terror in the form of illness, lies, cruelty, injustice and hatred. Satan uses more than planes. He uses rebellious people. He uses false religion. He uses words and troubles. The devil is determined to spread his reign of terror despite increased security scrutiny in airports and reinforced steel buildings. Satan's terror slips through walls, comes silently in the night and requires no fire or physical destruction. It starts in the darkest places of the heart and spreads like a raging inferno.
And like the grieving in New York City fifteen years ago today the spiritually terrorized ask, "how can I overcome this?"
You don't need a mayor to come into your home with a declaration and an economic plan for recovery. You need Christ and His plan of salvation.
There is only one way to beat terror. The hijacked heart can only be reclaimed through the Holy Spirit. There is no other way. The enemy will win without God. Satan will have His way if we aren't letting Christ have His.
There is one sure way that the soul can climb out of the rubble caused by evil. Redemption and sanctification through the death and resurrection of Jesus Christ. He has already climbed out of the darkest tomb. The evil of death overcame Him and yet He beat it. He can do the same for you and I. He will defeat every evil plot of Satan and give us eternal victory. Evil can take down buildings and temporarily separate families but it cannot kill spirits. Christ has declared that and claimed it. Now it is up to us to join His cause and daily choose His overcoming strength.
Because of Christ we have the promise of resilient hearts and strong spirits.
Because of Christ we can be stronger than every evil. 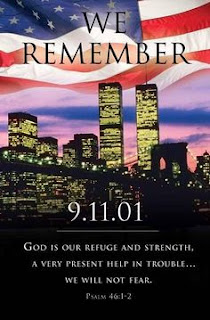 Posted by Stephanie at 5:53 AM